When I was a child, I noticed that whenever I was in a crisis of some kind, I tended to get so caught up in the emotions that it seemed like the world would never be the same again. Enmeshed in emotional drama, it became everything. I lost sight of the big picture. This is probably how most children react, before they learn not to let emotions take them over so fully.

I was about eight 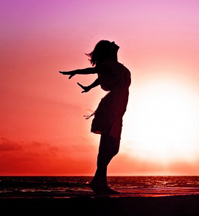 years old when I noticed that after a crisis passed, it didn’t seem nearly as bad, and the world really did go on. Looking back at a drama made it seem much less intense, and I wondered how my perception could have changed so much. How could I have thought it was the end of the world while I was in it?

After noticing this pattern a number of times, I had a revelation. If I could just find a way to remember that everything would be fine and not seem so bad after it was over, I could get through a crisis easier. That was when I made up a saying: “Everything always turns out for the best in the end.” I repeated this over and over in my mind the next time something happened that was painful. It worked! I no longer got so caught up in the drama. It gave me the strength to make it through, like a lifeline to the future—to a time after the worst had passed.

And lo and behold, after the crisis was over, everything really did turn out okay! The truth of that statement was reinforced over and over. I used it like a mantra throughout my youth. The little dramas of childhood gave me plenty of fodder for practice, and I gained a slight dis-attachment that helped me stay centered, though at the time I did not know that was what it was called.

Perhaps realizing this at a young age is why I have had such unshakable faith as an adult. I know deep down that the Divine Plan is working all the time—not only when things are going well, but even when crummy things happen. It is, in fact, the bad times that help us build faith, not the easy times.

This kind of faith is not something that can be taught. It really does come from experience. It comes from living through painful times and coming out of them stronger and having learned something. It comes from seeing the good that comes out of every experience, even the worst ones. There are always gifts—the silver linings. If we go through enough of these we do start to realize that even though we can’t understand in the moment why some things happen, there are always good reasons for them.

Few people seem to have this kind of faith. Even people who have been on a spiritual path for many years can occasionally have doubts, which then causes them to believe in accidental or random happenings that have no cause. But everything has a cause! To think otherwise is to increase suffering.

The entire Divine Plan is not ours to know, with our limited human minds. We only get glimpses of it. So this is where faith comes in. And with faith comes true surrender and acceptance of what we can’t change, and knowing inside that no matter how bad things are, if we wait long enough we may be able to understand the value of the experience. This gives us a level of peace that transcends human dramas.

Though I no longer need to repeat my childhood saying, it is deeply engrained in me as a Truth and I am grateful for the perspective it gave me. Plus, having faith makes life so much more enjoyable!